At the place of Devi  Jagran, now Raatri Jagran is done in which Goddess Durga is praised. Narendra Chanchal Ji has changed this format. Many Jagran groups now praise Goddess Durga in Raatri Jagran. But 3-4 decades ago Jagran was organised for the wish fulfilment and to praise God. Worship was done before starting the Jagran, then a resolution was made about the purpose of Jagran by the head of the family. After that other devotees used to offer some bhent to the goddess as per their wish and take her blessings. After all this process the main pandit asks a question from the head of the family that what he wants to listen to in this Jagran “shiv Ji k baraat k Katha” or “raja Harishchandra and raani tara k Katha”. Both the stories were explained according to the Vedas and in between other stories were also explained. To know about the Rohatgi dynasty it is important to know about the story of Raja Harishchandra and Raani Taara.

Raja Harishchandra was the brave king in Ayodhya. His kingdom was popular in all three worlds as an ideal king. The king has given the right to get information secretly, for this the king has to give rights for some of his kinsmen to rule over small territories. Being devoted to Ayodhya, it was their duty to give money, cereals and other information in the form of taxation. For this the expansion of the family was important and the king has many queens with many children.

Raja Harishchandra Suryavanshi has been known as an ideal king. He has two famous qualities which were famous among all. The first one was that he never said lie in his whole life. Second, was he fulfil his promise at any cost given to anyone in any condition this doesn’t matter. He fulfil his promise either he lost his life or his empire. Mahatma Gandhi was so inspired by Raja Harishchandra that Gandhi Ji decided to not tell lie in his life ever. Raja Harishchandra has to give exams many times to obey his principles. Sometimes he has to leave her family. Different views are prevailing in this regard. But the story which is known mostly is as follows-

A story is famous about Raja Harishchandra let’s know about this. Once Maharshi Vishwamitra was engaged in penance. King Indra and other gods were worried, they all wanted to break the penance. Raja Harishchandra was walking in the forest. He found some people were lamenting due to their problems, by listening to their voice the penance of Maharshi was disturbed. When Raja Harishchandra saw the Maharshi Vishwamitra, he felt sorry for the disturbance caused and asked what to do now. Maharshi Vishwamitra told him to leave his all kingdom. Then Raja Harishchandra was going to leave all the kingdom with his wife Rani Shaivya and son, Maharshi Vishwamitra reminds him to give some Dakshina is his responsibility. Raja Harishchandra said after giving all the kingdom he don’t have any right to the things there. He requests to give some time for Dakshina with the medium of his wife and son. In this, he started working as a servant in the samshan under the owner named Dome, he gave Dakshina to Maharshi and fulfilled his promise. It is well known that the king did not allow his son to be cremated even because of his duty. When the queen started giving half part of her saree to his son for the funeral in the form of tax. Then the whole sky was divinely revealed and with the rain of flowers, all the God and goddess spoke that-Rajan, these troubles were for your examination, in which you were successful. They all said now you are free from such debts and should stay in heaven with your son and wife. Then the king spoke that if I take place in heaven with my son and wife, and leave my state and people then I will be a part of great sin. He requested to give a place in heaven for his son and queen. In this way, he accepted his kingdom in Ayodhya.

Raja Harishchandra has established Shiv jyotirlinga at the banks of Kashi while working as a servant in samshan which is famous as “Harishchandra Mahadev”. This is the same place where Queen Shaivya had come for the funeral of the son. At present, there is a Dharmeshwar temple on the banks of Ganga near the Manikarnika Ghat Temple in Varanasi. During ancient times, there was a samshan ghat at which the above test was taken. This ghat is now known as the name “Harishchandra Ghat” and is the proof of the truth about this incident. 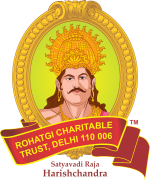 Rohatgi samaj is a community that helps in the development of society. It is a community that works for a better future. The community has its charitable trust, school, Dharamshala and trust management. To know about the history of Rohatgi samaj it is important to know about the story of Raja Harishchandra. The community celebrates Holi Milan, Independence day, Raamleela, Raja Harishchandra Jayanti every year.

Rohatgi community has done historic work by creating a directory in which the rohiatgi’s people who are living in different cities are mentioned. About 100 Rohatgi families which are settled in foreign are also mentioned in the directory. This excellent work is done by the team of Sh. Chhotey Lal, Raadhey Mohan, and Anil Kishore. We are very thankful to them. With a small effort, we want to explain about Rohatgi community, to understand this we will have to go in the past.

According to Granths – Raja Harishchandra has ruled Ayodhya due to which his son Rohit could not become uttaradhikari. He continued to work as a supporter. He ruled the area of Kashi and Chandravati which was later known as Rohitpuram. After seeing the popularity of son Rohit, Raja Harishchandra gives the responsibility of his kingdom to his son Harit and goes to Rohitpuram with his well-wisher. The children of Rohit and other people in Rohitpuram were called Rohitjan. Rohatashgarh fort is also established there and the son of Raja Harishchandra -Rohit was worshipped as a god. The place is known as Rohatasan. The statue of Raja Harishchandra is mentioned in Shahavad Gajat 1924. Aurangzeb had left no chance to destroy its grandeur. Still, the historic facts could not deny the reality of Rohitpuram and the fort of Rohatasgarh.

This fort is still safe above a valley near Son River in Akbarpur Village which is 35-40 km away from the Sasaram district of Bihar. This fort is one of the best for its strongest and space. Sher Shah Soori considered it stronger and safer than Chunargarh. This in itself is an example of an architect. It is completely made of stone. The government should make this fort a tourist site in the form of national heritage. It is spread over 84 km. We can see the remains of hundreds of small-big rooms, palaces, gardens, and markets.

Due to language and country Rohit samaj’s name has changed several times. We can see the description of Rohitak Ganrajya (रोहितक गणराज्य) and the resident of their Rohatgi in Mahabharata. The language of that era was very tough which was later be simplified in Rohitki (रोहितकी), Rohatki (रोहतकी) And Rohatgi (रोहतगी) . This caste was destroyed at the time of Chandragupta Vikramaditya. People migrated and spread to other areas like Mathura, Agra, Patilputra(Patna), and the areas near Ganga. In these places, the families remain counted. They started their business or service to save them. East India had taken control over all India by defeating the Mughals. An English historian of that time has mentioned the fort in the “Journal of Francies Buchanan”. I went up to Rohatas by route to Rajghat. The fortress of ‘Rohita’ son of Harishchandra and grandson of Trishanku from Ayodhya- these lines are mentioned in an article. To write these lines, the inscriptions received from Wukhanan (वुखानन ) were thoroughly studied. Later on, the Odissa government has mentioned in its gajat. Therefore, there is evidence of the connection of this fort with the Rohitashva and Harishchandra dynasties. From here the residents were called Rohitvanshi, Rohitak or Rohitaki and later on they were called Rohatgi. Disturbed by the attack of Chandragupta Vikramaditya, Rohatgi was scattered here and there. As per the conditions and requirements of the time, they started to do business and service. Being engaged in business, they were considered as Vaishya. In the present era also they are not capable to establish their identity in North India, Harayana, Bihar due to involvement in the business. The description is given in three pages from the title of Harishchandra in Wikipedia. Apart from this, Sudha Rastogi and Deepak Tyagi have also published their research paper which could not be obtained. 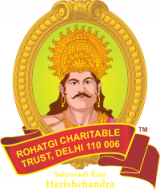 Help us to reach 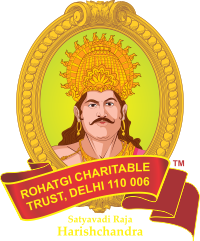 Rohatgi community works for the welfare. Our aim is to growing continue and do work for the betterment of our community. It is a community that focused on social work.

Information provided about individual members is as provided by the members themselves to the Rohatgi Samaj. Rohatgi Charitable Trust (Regd.), Delhi is not responsible if any information found incorrect.